Jefferson County assists the State Department of Health in monitoring the safety of recreationally-harvested shellfish. Recent closures are posted as press releases in our news section. Signs are also posted at public beaches. See the Before Collecting Shellfish section, below, to find out what areas are open or closed. Closures or warnings can occur because of Biotoxins, Vibrio, or Pollution (see below). In addition, Washington Fish and Wildlife has rules and seasons for each recreational beach - consult their website and current rules pamphlet for more info.

Harmful algae blooms (sometimes referred to as "red tides") can produce dangerous toxins. Seven cases of paralytic shellfish poisoning (PSP) occurred in Jefferson County in September 2012 when a party harvested and ate mussels in a closed area. This poisoning resulted in hospitalization for several members of the group. In July 2012, Jefferson County experienced its first-ever closure for Diarrhetic Shellfish Poison (DSP). Shellfish are also tested for Amnesic Shellfish Poison (ASP).

Vibriosis can lead to gastrointestinal problems and is caused by Vibrio bacteria that can be found in shellfish. A Vibrio warning to cook all shellfish for recreational harvest from Hood Canal is typically issued every summer due to warm water conditions.

Areas around marinas and wastewater treatment plants are always closed for shellfish harvest due to the potential for pollution. There can also be temporary closures in the case of sewage or oil spills.

Each batch of commercially harvested shellfish is tested by the State so you can assume that properly documented and handled shellfish from restaurants and stores are safe to eat. 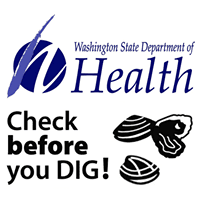 Before Collecting Shellfish for Recreation

What are the signs and symptoms of shellfish poisoning? Check the DOH Shellfish-Related Illnesses webpage for information or call Jefferson County Public Health at 360-385-9400. If you are experiencing symptoms please consult your healthcare provider. For severe reactions call 911.

Tracie Barry gave this overview of marine biotoxins (PDF) to shellfish volunteers in Jefferson County on May 26, 2021. She explained how the monitoring program works and gave a summary of last year's season.

Harmful algae blooms are showing up in places they have not been seen before, such as Hood Canal. Clara Hard gave this presentation on biotoxins (PDF) at the Quilcene Community Center on May 14, 2015.